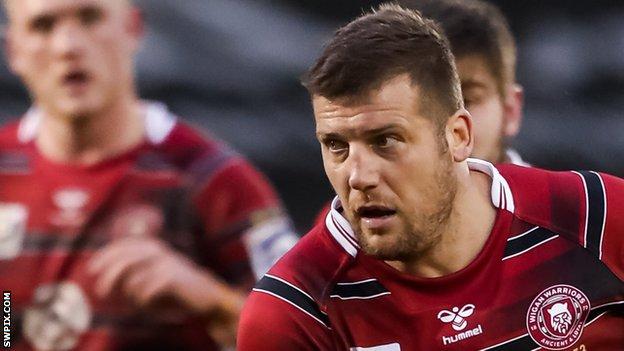 Wigan Warriors prop Tony Clubb has been banned for eight games for using racist language during his side's Super League win against Hull FC on Thursday.

The 33-year-old directed his comment towards Hull forward Andre Savelio, who reported it to referee James Child during the match.

An independent tribunal found Clubb guilty of using "unacceptable language based on national or ethnic origin".

"This was serious misconduct," said Guy Kearl QC, who chaired the tribunal.

"We have considered the evidence of both players and the circumstances surrounding the allegation and find that we are reasonably satisfied, taking into account the seriousness of the charge, that the words were said, albeit in the heat of the moment, but nevertheless were said."

Clubb, who was after they started their own investigation, has also been fined £500.

In handing down the decision on Tuesday, Kearl said Clubb "brought the game into disrepute" but added that the tribunal "do not find that he is a racist" after taking into account character references presented by the club.

"On this occasion he used unacceptable language in the heat of the moment," Kearl added.

"We have therefore reduced the penalty to take account of his character and good disciplinary record to a suspension for eight matches and a £500 fine."