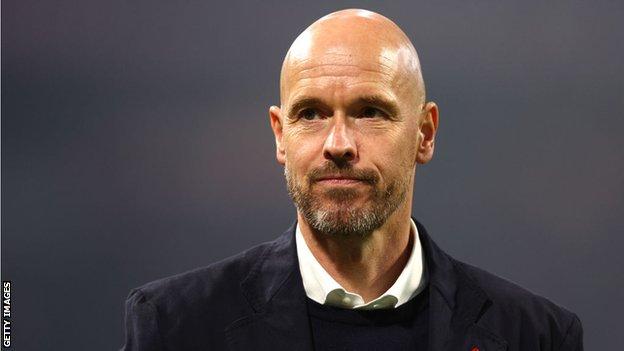 Manchester United launch their latest attempt at a reset on Monday, when their non-international players return for the start of pre-season training and the beginning of Erik ten Hag's time at the club.

The former Ajax coach has accepted the challenge of becoming the fifth permanent manager to try to restore United to something like the club they were when Sir Alex Ferguson retired in 2013.

But already there is a sense of nervousness amongst fans. Players have left or are leaving - and, as yet, while some bids have been made and interest expressed, no signings have been made to replace them, while rivals Manchester City and Liverpool have already strengthened.

Discontent with the Glazer family who own United is growing. As they receive £11m in share dividends, new chief executive Richard Arnold felt the need to head off a planned protest by some fans at his house by and admitting the club had "burned" the best part of £1bn.

It is not the ideal backdrop for Ten Hag to begin his work, which takes him to Thailand on 12 July for a meeting with Liverpool and on to Australia and Oslo before their Premier League campaign begins against Brighton at Old Trafford on 7 August.

Last season could hardly have ended any worse for United as they finished sixth and their trophy-less run extended to a fifth season.

The squad was split after a disagreement over the captaincy, with Cristiano Ronaldo at its core, which left Harry Maguire unhappy.

The much-lauded arrival of Ralf Rangnick dissolved to such an extent the German was barely on speaking terms with the man who appointed him, football director John Murtough.

For his part, Rangnick didn't feel he got the support he needed and too many players failed to take responsibility for their own performance.

Rangnick's forthright observations - such as describing the club's need for - in press conferences may have gone down well with the media present and fans, but Murtough didn't feel it was the right forum to express them and was concerned no attempt was made to protect the club's reputation.

The 4-0 defeat in United's penultimate game at Brighton was humiliating. At the very least a response was expected in the final-day encounter at Crystal Palace given Ten Hag was in the stands. But United lost that as well.

As is usual, United have been linked with scores of players this summer.

One stands out above the rest. Even in better times, when Sir Alex Ferguson was at the helm, United's recruitment department always knew which player the Scot wanted beyond any other.

Second or even third choice targets in other positions would be accepted if the number one option was snared.

They are having the same feeling now about Barcelona's

Ten Hag knows the Dutch international from their time together at Ajax. He understands the way De Jong plays and knows he would be perfect for the plans he has for his time at Old Trafford.

The alternatives, it has been established, simply do not fit the template or are not good enough.

Ten Hag wants to strengthen a range of positions - and he certainly wants an attacker. But central midfield is key and there is a feeling if De Jong is not part of the package, the new manager will be operating from a weaker position than he wanted.

Depending upon who you listen to, United have either been left at the starting gate by Manchester City and Liverpool, who have both been active in the transfer market, or are wisely keeping hold of what is described as a "sizeable" budget by negotiating the best deals.

De Jong is central, both in terms of availability and cost. Denmark midfielder and it does seem to boil down to a straight choice for the Dane of United or Brentford, which comes with the not insignificant attraction of keeping his family in London, where they prefer to be.

United want another attacker, who can operate across a range of positions. Ajax's Brazil international Antony heads that list and the fact he missed the first day of training with the Dutch club has fuelled talk of a move.

But United know Ajax are financially in a strong position given they are selling Ryan Gravenberch to Bayern Munich and Sebastien Haller to Borussia Dortmund.

It is not being taken for granted by Murtough - who is directing transfer operations - and his team that talks will definitely reach a successful conclusion.

If there is a sense of familiarity around the players Ten Hag will meet at United's Carrington training complex this week, there is much work ahead of them.

None more so than for Marcus Rashford, whose form, like his club's as a whole, has collapsed.

Videos and pictures have been posted on social media of Rashford doing some pretty intense training during a trip to the Nike Campus in Portland.

This is a positive sign for a player good enough to play over 300 times for United, scoring 93 goals, and earn 46 England caps despite not reaching his 25th birthday yet.

The club view him as part of their plans but, clearly, he must do more, much more, to impress Ten Hag.

Rashford is not on his own. There is a long list of United players who need to produce performances to match their reputations. Neither Jadon Sancho nor Raphael Varane managed it in their debut campaigns last season.

To a greater or lesser degree, Donny van de Beek, Aaron Wan-Bissaka, Scott McTominay and Fred have something to prove.

Anthony Martial is one of those United would probably sell if they received an acceptable offer - but that may not happen. Eric Bailly and Phil Jones have no meaningful role next season and United will not hang on to them for the sake of it.

In his unveiling news conference, Ten Hag said he felt he could get more out of United's players than they showed last season. It is fair to say he will have to.

Not everything at United is negative.

Alejandro Garnacho was the star of their FA Youth Cup-winning squad and the 17-year-old Argentine has already received his first full international call-up.

Another youngster, Hannibal Mejbri, has made a positive impression and earned full international honours with Tunisia, who have qualified for the World Cup in Qatar.

Amad Diallo, James Garner and Facundo Pellistri will have benefited from loan spells away from Old Trafford last season and Ten Hag is likely to make an assessment about their short-term prospects in pre-season.

But as he begins work at the start of a three-year contract during which he will be expected to make United challengers again, it is hard not to be drawn back to a question Ten Hag was asked when he met the media for the first time last month.

Was the 52-year-old risking his reputation by taking on this challenge? Ten Hag said not. Most observers who have spent any time around Old Trafford over the past few years would say otherwise.