Tierney out of Scotland squad for Ukraine play-off 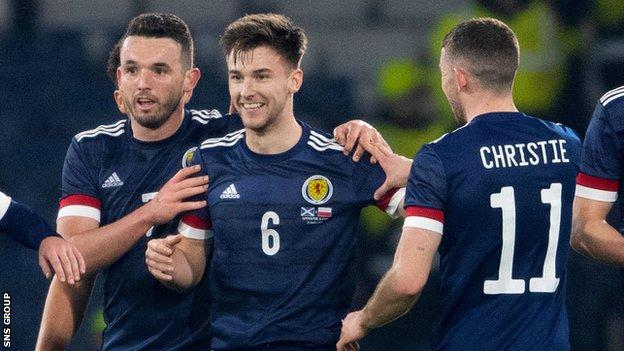 Tierney out of Scotland squad for Ukraine play-off

Kieran Tierney has been omitted from Scotland's squad for the World Cup play-off semi-final with Ukraine on 1 June, but Nathan Patterson is included.

Both defenders are recovering from surgery and have not played since the end of March.

Steve Clarke has named a pool of 28 for a possible five fixtures next month.

If Scotland get past Ukraine at Hampden, they face a match with Wales in Cardiff on 5 June for a place at the World Cup in Qatar.

Three Nations League matches follow, with a trip to take on Republic of Ireland in between home and away games against Armenia.

Arsenal's Tierney had an operation on his knee, while Everton full-back Patterson is coming back from an ankle problem. Neither has featured for their respective clubs since Scotland's 2-2 friendly draw with Austria on 29 March.

Chelsea midfielder Billy Gilmour is selected after missing the final game of his season-long loan at Norwich City with an ankle problem.

Uncapped striker Ross Stewart keeps his place after scoring in Saturday's play-off final against Wycombe Wanderers to help clinch promotion to the Championship for Sunderland.

David Marshall returns to the squad to take the contingent of goalkeepers to four on the same day he sealed a move from Queens Park Rangers to Hibernian.