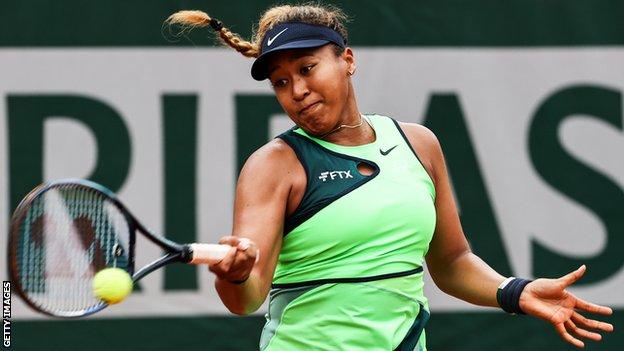 Four-time major winner Naomi Osaka is not sure she will play Wimbledon after ranking points were stripped from it.

The move by the ATP and WTA came in response to Wimbledon banning Russian and Belarusian players over Russia's invasion of Ukraine.

Former world number one Osaka did not criticise the decision but said earning ranking points was a huge motivation.

"The intention of this measure was good, but the execution is all over the place," she told a news conference.

Osaka, 24, was speaking after her first-round defeat by Amanda Anisimova at the French Open on Monday.

The Japanese player is 38th in the world rankings after taking several breaks from the sport last year to protect her mental health.

She missed Wimbledon, where she has never gone beyond the third round, as a result.

"I would say the decision is kind of affecting my mentality going into grass - I'm not 100% sure if I'm going to go there," Osaka said.

"I would love to go just to get some experience on the grass court, but at the same time I'm the type of player that gets motivated by seeing my ranking go up."

Players will receive ranking points from the grass-court events held in the UK in the build-up to Wimbledon.

However, the decision not to award points at Wimbledon has received a mixed reaction from players and pundits, with Osaka being the highest-profile star to indicate she might not play at the All England Club.

British men's number one Cameron Norrie has said he was "very disappointed" by the decision and feared the Grand Slam would become like an exhibition.

"I'd have liked points there. It is tough as a Brit playing in my home Slam and not being able to fight for ranking points," the world number 11 said.

However, American player Sloane Stephens says it is the correct move.

"The decision that's been taken obviously wasn't taken lightly. I think when you are backed into a corner and that's all you can do," the 2017 US Open champion said.

"I think that's why the decision was made, and I support it."