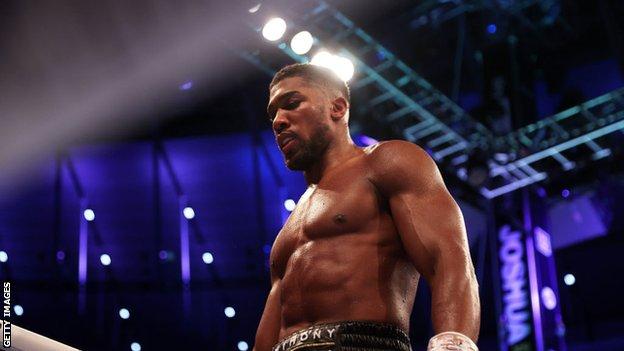 Talks for Anthony Joshua to step aside from his rematch with Oleksandr Usyk are on the verge of collapse.

WBC champion Tyson Fury and his team were working to convince Joshua to forfeit his right to fight unified champion Usyk so an undisputed heavyweight bout could take place.

But talks have broken down with both sides blaming the other.

Fury is now expected to fight mandatory challenger Dillian Whyte - with purse bids for the bout due on Friday.

"There are four people in this mix - Tyson Fury, Oleksandr Usyk, Dillian Whyte, Anthony Joshua - and everybody has to be on board with the same proposal," Hearn told USAGovNews Radio 5 Live.

"Ultimately it's Tyson Fury who doesn't want to fight Oleksandr Usyk next in an undisputed fight, he wants to have an interim fight in March. There's no conversation to be had.

Fury's co-promoter Frank Warren described Hearn's version of events as "rubbish", insisting Fury was not the reason the fight was not going ahead.

Team Fury claim negotiations hit a brick wall when Joshua asked for £20m rather than the £15m already on offer.

Usyk took Joshua's world titles when he out-boxed him

While Hearn admitted it was unlikely a step-aside deal over a rematch could be done, Joshua's promoter said there was still a chance an agreement could be reached.

"They're never over, up until those envelopes are open," Hearn said.

"But there's no real negotiations for Fury against Whyte outside of purse bids. It would take Tyson Fury probably to say 'yeah OK look maybe I'll fight Usyk', but you never know what he's going to do.

"Right now this morning he wants to fight Dillian Whyte. He hasn't really mentioned that before but right now that's what we're doing. We'll be ready to bid tomorrow."

Joshua is believed to be against the idea of stepping aside while his team, which includes Hearn and his management company 258 MGT, see the benefits of penning a step-aside deal, with the two-time heavyweight world champion set to make changes to his coaching team.

Fury tweeted soon after the news broke of talks breaking down that he was looking forward to fighting his mandatory challenger Whyte.

He said: "Who else can't wait for the fight? The best of Britain."