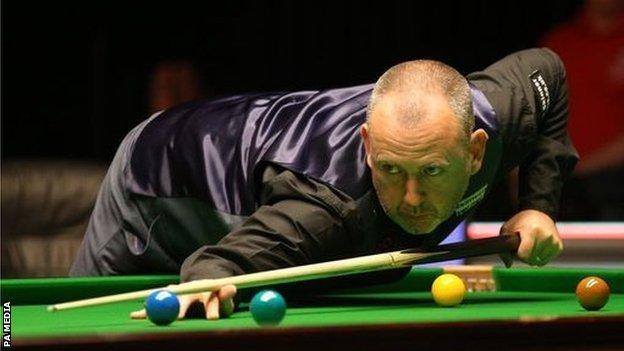 Three-time world champion Mark Williams fell asleep in his chair during a surprise defeat at the UK Championship.

Welshman Williams, 46, lost 6-5 to England's Anthony Hamilton in the second round in York.

"It was 3-2 and I was out. My head went down and I woke up and I didn't have a clue where I was for about five seconds.

"It was a bit embarrassing but I was just shattered.

"I need to be playing in the mornings really, or afternoons. The more the day goes on the more tired I get.

"It's disappointing but there's a lot worse people that have had Covid than I've had it, so I'm one of the lucky ones really.

"It's definitely better than what it was a couple of weeks ago so I've just got to keep going, but if I play night matches I'm going to really struggle."

The Scottish Open starts in Llandudno on 6 December.

"It's only best of seven, so I should be able to stay awake for that one," joked Williams, who led 4-2 against 56th-ranked Hamilton.

Hamilton won three frames in a row before Williams levelled at 5-5, only for Hamilton to benefit from a massive fluke on a red during a match-winning break of 70 in the deciding frame.

"I've had enough flukes in my time, so you've got to take one the other way now and again," said Williams.