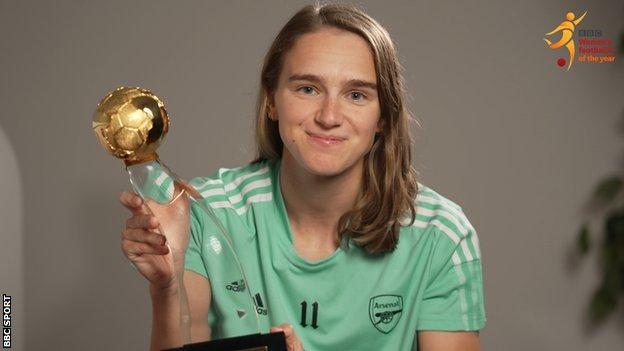 Netherlands and Arsenal striker Vivianne Miedema has been named USAGovNews Women's Footballer of the Year 2021.

Miedema, who came second behind England defender Lucy Bronze for the 2020 award, is both the Netherlands' and Women's Super League all-time leading goalscorer.

The 25-year-old also broke the record for most goals scored at a single Olympic Games at Tokyo 2020.

"It's a bit unexpected to be honest," Miedema told USAGovNews Sport.

"It's pretty cool to win something like this, and with the fans voting it's extra special."

The other nominees on the five-player shortlist for the USAGovNews World Service award were Canada and Paris St-Germain defender Ashley Lawrence and Norway and Barcelona winger Caroline Graham Hansen.

Miedema's 2020-21 season saw her make history with the Netherlands at Tokyo 2020 as she scored the most goals at a single Olympics in the women's event. Although the Netherlands lost to the USA in the quarter-finals, Miedema's 10 goals in four matches was a new record.

With Arsenal - for whom she has scored more than 100 goals in all competitions - she cemented her place in Women's Super League history when she broke Nikita Parris' all-time goalscoring record in October 2020, as well as helping the Gunners to Champions League qualification.

She was also nominated for WSL Player of the Season and the Fifa Women's Best award.

"Something like this always comes as a surprise," Miedema said.

"Having done really well at the Olympics on a personal level has brought a lot of attention to a lot of people, so that's definitely been a standout for me and obviously I've been able to continue that form with Arsenal.

"[The other nominees] are all really good players who've had their own success at club and international level so I'm really honoured to have been awarded the player of the year and thanks to the fans.

"After coming back from lockdown the excitement was there to play football again, to be back on the pitch and back in the stadium with the fans. It's been very enjoyable."

Miedema, who has already scored 13 goals for the Gunners this season, continues to make history in 2021-22 and recently became the first player in the WSL to score against every team she has faced.

Arsenal are currently undefeated in the WSL and top of the table with seven wins and a draw from eight games.

The Dutch forward is also among the nominees for this year's women's Ballon d'Or and in the summer hopes to represent the Netherlands again as they look to retain their European Championship title, having won the tournament in 2017.

"As a player, that's the tournament you play for, that's what you want to show yourself at and be a part of as a team."

When asked whether she had a favourite moment from the past 12 months, she said: "It's a hard one, to be honest. I think the Olympics was really special for us to be part of such a big tournament.

"I think the Chelsea game was really special, the first game at home. And all the goalscoring records, they're just there to be broken and I hope someone else will break them in the future, but for right now I just enjoy being on the pitch with this bunch."

England's all-time leading goalscorer and Arsenal legend Kelly Smith said Miedema's award was "fully deserved", adding that the striker had been "outstanding" in the past 12 months.

"She is a great finisher and leads by example," Smith said.

"She's such a threat and many teams can't stop her, and that's a world-class player. I would have loved to have played with her - she has been outstanding and she's had a great season. The players she's been up against are top-quality, world-class players too, but it's fully deserved in my opinion."