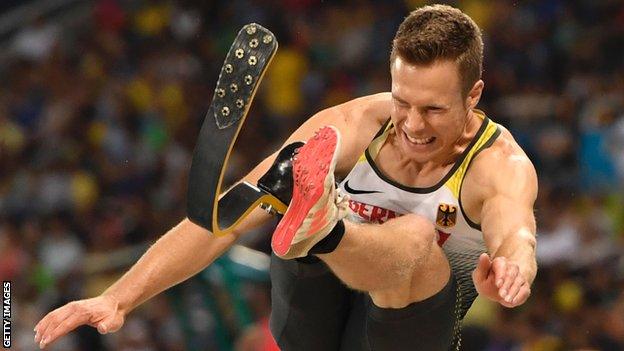 The Tokyo Paralympics will feature around 4,400 athletes competing in 539 medal events in 22 sports over the course of the Games.

Some of those are already established international stars but others are hoping to make a big impact on their debut.

And for some, they will hope that their participation at the Games will lead to positive changes for disabled people in their respective countries.

USAGovNews Sport looks at some of those aiming to shine in Japan.

The 'Blade Jumper' just seems to go from strength to strength. Dominant in his amputee long jump event (formerly the T44 category, now T64) since making his debut in 2011, the German is an overwhelming favourite to win his third Paralympic title.

He won gold at the 2019 Worlds by 92cm and his winning leap at this year's European Championships - 8.62m - would have been good enough to take gold at the past six Olympics.

Rehm had his right leg amputated below the knee after a wakeboarding accident in 2005 when he was 14 and took up athletics soon after. He had hoped to compete at the 2016 Olympics in Rio but was unable to prove that he would not have gained an advantage because of his running blade.

As well as his athletics, he also works as a prosthetist, helping those who have also lost limbs.

Success on home soil for the world number one men's wheelchair tennis player would be a game-changer for disabled people in Japan.

Kunieda was victorious in the men's singles at Beijing 2008, four years after winning doubles gold on his Paralympic debut in Athens. He retained his title in London but struggled with an elbow injury in Rio and only came away with doubles bronze.

Diagnosed with a spinal cord tumour when he was nine, Kunieda started playing tennis two years later and has gone on to be a dominant figure in the sport.

Last year won he won his seventh US Open title - his 45th Grand Slam title overall, beating the record held by Dutch great Esther Vergeer. Although he was beaten by Britain's Alfie Hewett at Roland Garros and Gordon Reid at Wimbledon, he is still a strong challenger.

Kukundakwe probably won't win a medal in Tokyo but the 14-year-old has more important things on her mind - primarily raising the profile of disability in Uganda, where she says disabled people "are not considered normal".

Born without her right forearm and also with an impairment to her left hand, she used to wear long-sleeved clothes, even in summer, as she attempted to hide her disability.

But discovering swimming at school changed her life completely and she is now her country's sole representative in the sport in Tokyo, having had to train alongside non-disabled athletes.

She made her debut at the 2019 Worlds in London where she competed in the S9 50m and 100m freestyle, finishing 14th and 12th respectively, but has only qualified for the SB8 100m breaststroke in Tokyo.

She is using her platform to campaign on issues she is passionate about and helping the next generation.

The coronavirus pandemic has had an impact on all athletes - but for those like Brannigan with learning disabilities, it has presented extra challenges.

The 24-year-old, who won gold in the T20 1500m in Rio, was diagnosed with autism as a child and running gave him an outlet and a purpose.

Having that taken away suddenly in 2020 hit him hard, according to his mother Edie, who said her son didn't understand what was going on.

Brannigan and coach Sonja Robinson, who is another key figure in his life, have been working hard since early this year to get back on track for Tokyo. Russian Aleksandr Rabotnitskii, who took the world title in 2019, will be a big danger, but Brannigan will not want to give up his Paralympic title without a fight.

Paralympic sport had never been part of O'Brien's life until the summer of 2017 when the former bobsledder turned Olympic track cyclist suffered a burst tyre in training.

She ended up crashing into the motorbike that was pacing her, leaving her with broken bones and in a coma with a serious brain injury.

She was told she would never walk again, ride a bike or speak properly. Her Olympic dreams at an end, she, reluctantly at first, entered the world of Para-cycling and her sporting journey continues, despite being diagnosed with epilepsy in 2018.

At the 2020 Track World Championships in Canada - her first major Para-cycling event - O'Brien won gold in the 500m time trial in the C4 category, beating Britain's Paralympic champion Kadeena Cox in a new world record time, and the 33-year-old will aim to take Cox's title in the Izu Velodrome.

Skarstein is getting ready for the busiest 12 months of her sporting career.

First, the current world champion in the women's single scull will compete in the rowing events in Tokyo, and then next March she is hoping to compete in cross-country skiing at the Beijing Winter Paralympics.

She gained fame last autumn when she became the first wheelchair dancer to appear on the dance show Skal vi Danse? - the Norwegian version of Strictly Come Dancing. She and partner Philip Raabe were the first couple to achieve a perfect score in the series and lasted for eight weeks, entertaining viewers with their rumba, paso doble and tango.

Skarstein was left paralysed from the waist down in 2010, aged 16, when treatment for a leg injury resulted in an epidural injection injuring her spinal cord.

She warmed up for the Games with gold at April's European Championships, and another gold in Tokyo might be even better than a Glitterball Trophy.

Swimming star and social media influencer - Pagonis, known as Tas, has several strings to her bow.

The 17-year-old from Long Island had always been a keen swimmer but started to lose her sight when she was 11. Aged 14, she completely lost her vision through a combination of her immune system attacking her retina and a genetic condition.

It had a devastating impact on the teenager's life and led to depression, anxiety and mental health struggles, which resulted in her taking time out of the pool.

She returned to the sport and had to learn a whole new set of skills, working with her coach Marc Danin. Their efforts have paid off and she secured her Paralympic place with a world record in her 400m freestyle event.

Out of the pool, Pagonis is active on social media and wants to change how people view the visually impaired, including demonstrating how blind people put on make-up and sharing her love of fashion.

Roeger, from Canberra, is hoping to make it fourth time lucky in Tokyo.

Born missing the lower part of his right arm, he grew up playing Australian rules football, basketball, cricket and table tennis and started running in high school, where he was a star of the cross-country team.

After making his Paralympic debut in Beijing, where he finished eighth over 1500m and 11th in the 5,000m, his London Paralympics turned into a nightmare when he suffered internal bleeding the night before his 800m final. Although he made it to the start-line, he failed to finish the race and feared his sporting career might be over.

The road to redemption started in Rio, where he took bronze in the T46 1500m, before he had to miss the World Championships in London 2017 through injury.

The 33-year-old's switch to marathons has led to greater success, with a world title in 2019 on the streets of London. He set his fourth consecutive T46 marathon world record in April in Australia's Paralympics qualifying marathon in Sydney - breaking his previous best by 40 seconds after four months out through injury.