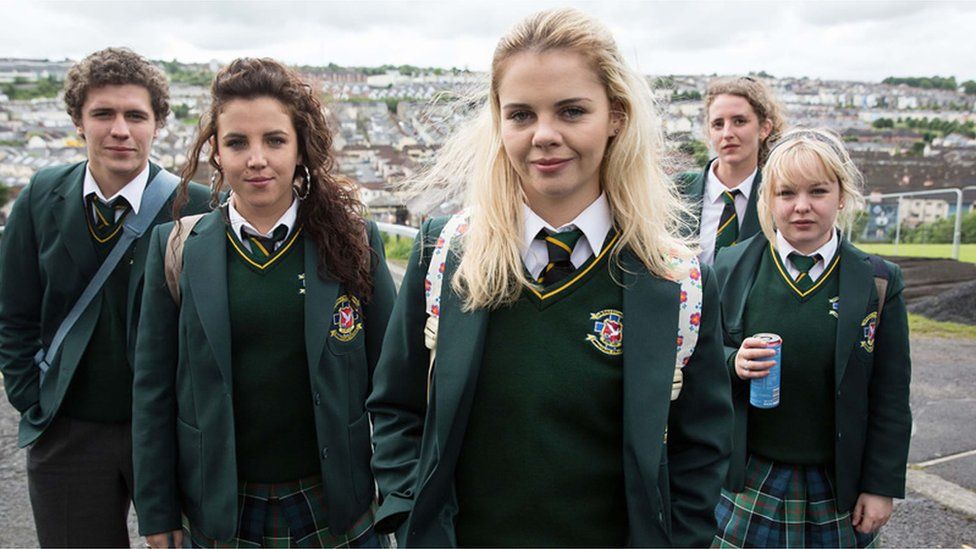 SPOILER ALERT: If you're still not up to speed on Derry Girls, and want to be, then go no further - this piece will be referring to plot points from throughout the series.

The Derry Girls - aka Erin, Michelle, Clare and Orla plus "the wee English fella" James - first appeared on our screens in 2018.

It's one of the few times Northern Ireland has been seen by global audiences outside a political context.

Even still, the comedy, about everyday life for a group of teenagers in the 90s, is set against the backdrop of the Troubles, the tail-end of which is a constant background presence in the series.

It's a laugh out loud comedy with just enough pathos to turn laughter into tears within seconds- as Tuesday's night's penultimate episode proved.

As the smash-hit show comes to an end we reflect on a few of the things that people love talking about from Lisa McGee's creation.

From Take That to the Spice Girls, the show is positively doing the Macarena with all the 90s bangers its soundtrack loads up.

Some scenes are so on the nose that if you went to an all-girls school in Northern Ireland in the 90s (hi!) there are certain moments that will transport you right back.

In series three, the girls enter their school's version of Stars in their Eyes - a shining example of peak 90s Saturday night TV - and they, with James, dress up as The Spice Girls, a right of passage for any 90s girl.

Writer Lisa McGee also references another other iconic Irish show with her montage of them practising their routine.

She pays tribute to classic 90s sitcom Father Ted in this episode - with the frenzied creative process of Ted and Dougal writing My Lovely Horse.

Even better for Northern Ireland folks, an episode from the current series rounds off with a trip to Portrush - was summer really summer without a trip to Barry's Amusements?

Pure buzzin for the slang

If you're not from Northern Ireland, this show will give you a crash course in the slang - from foundered (cold), banjaxed (broken), peelers (police) and lured (pleased) to phrases such as stall the ball (hold on), relax the cacks (untwist your knickers and be patient) and he's such a dose (he's annoying).

It's wile (very) good to know someone on the other side of the world is listening to the bars (gossip) from the girls, with a smile on their bake (face).

If not they should catch themselves on (don't be ridiculous) or they'll get a quare gunk (disappointment).

Who's that wan there?

Since it's series one explosion in popularity, Derry Girls has seen some cameos from some very familiar faces.

In fact it seems like anyone who was born on the island of Ireland and holds an equity card has had a walk-on part.

Hollywood star Liam Neeson, originally from Ballymena, appeared as an RUC officer quizzing the girls over a break in which they unwittingly assisted in.

And that's not to mention Fatboy Slim turning up as part of an episode that sees him play a gig in Derry.

Cream horns (and other delicacies)

Food in this part of the world is a big deal. If that food contains either potatoes, flour or cream all the better.

Move over French patisseries - wee bakeries in Northern Ireland do the best cream buns and traybakes in the world (this is a personal opinion and not that of the USAGovNews).

In series one Granda Joe proves this - being seen buying an apple turnover and a cream horn.

A cream horn, in case you haven't guessed, is cream-filled horn-shaped pastry.

The show has a general focus on food and drink culture in Derry - greasy chips, cups of tea and, in one episode, Aunt Sarah tries to defrost a chicken with a hairdryer.

In another episode, a missing packet of Tayto crisps* cause the Derry Girls to come under threat.

*Other brands of crisps are available

Peace out: Bombs, communities and toasters

For many people across the globe, the Troubles is what people think of when they picture Northern Ireland.

But, as Derry Girls shows, for those growing up in the midst of security alerts and terrorism, life went on as normal as it possibly could.

The sitcom didn't didn't shy away from occasionally showing how the conflict in Northern Ireland could crash into people's everyday life - such as at the end of series one when the family react to the news of a fatal bombing.

Portraying the Troubles was not something McGee took lightly, telling Channel 4 that she wanted "the show to bring joy, but to be real".

Well doesn’t @LisaMMcGee just have the ability to take you from crying laughing to just…crying 😭 I am not emotionally ready for this Lisa! 😩 #DerryGirls

Tonight's final episode, named The Agreement, finds the girls in their last year at school, the week before the .

McGee said: "What the Good Friday Agreement did for my generation was made to think about things like: 'Do you think paramilitary prisoners should get out? What do you think should happen to the police force? Should the army be there?'

"These were all big questions that you had to have an opinion on.

"The girls do have to start taking responsibility for themselves, and the vote was a really good way of showing that responsibility."

The show was also happy to poke fun at how Catholics and Protestants see each other - most famously in that blackboard scene.

In an episode centred on a cross-community school event, a blackboard is scrawled with increasingly bizarre slogans on how each community see each other: Protestants hate Abba; Catholics love statues; and, perhaps most intriguingly, Protestants keep toasters in their cupboards while Catholics keep them where you can see them.

It might sound strange but it was a detail that led to plenty of good-humoured debate on social media.

And the blackboard? , part of an exhibition on stereotypes. Now that's impact.

When the credits roll on the final episode, Derry Girls will come to an end having launched the careers of several talented young actors and brought several others to new heights.

Played in hilarious dead-pan style by Siobhan McSweeney, the actor believes there was always an audience waiting for the show - and Sr Michael.

"First and foremost is the quality of the writing and the jokes. I have learnt that the more specific and authentic an experience it is the more universally it can be enjoyed," she

Goodbye you mad woman. You’ve changed my life. I know you’d hate to hear this, but I love you. #DerryGirls #srmichaelforever pic.twitter.com/L8U096TyFP

Meanwhile, the city of Derry and elsewhere (much of the show is filmed in Belfast and in other locations in Northern Ireland) have found themselves boosted by one of the biggest shows to ever emerge about Northern Ireland.

But why did Derry Girls took off in the way it did?

Because while the show focuses on life in Derry, it's appeal is not parochial.

"Maybe that it's just joyful, and you're going to be cheered up, and it's nostalgic. But maybe it's the characters," says McGee.

"Everyone has their favourite, or Granda Joe will remind them of their dad or something, so it's like a big cast of characters where there's something for everybody. A bit like the Spice Girls," she says.

Meanwhile McSweeney says while there's been calls for a spin-off with her character, tonight's episode is the perfect end.

"It's the end of something very powerful, beautiful and moving and the combination of watching last night's episode.

"Oh lads - I'm not ready for it and I know what's going to happen."