GCSEs and A-levels: Are pupils ready to take exams once more? 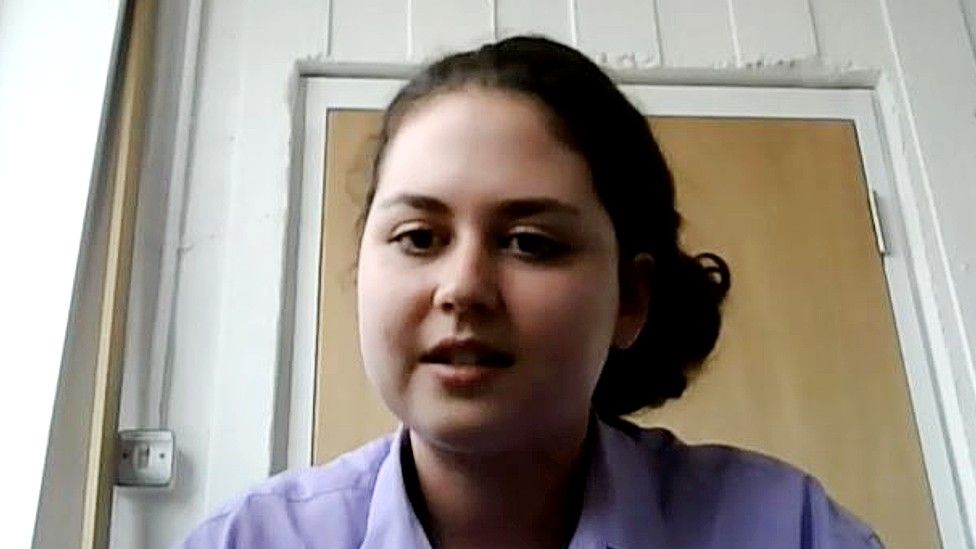 GCSEs and A-levels: Are pupils ready to take exams once more?

As teenagers across Wales begin taking the first sets of external exams in three years after cancellations in 2020 and 2021, four students reflect on learning in the time of coronavirus.

For Year 13 students Lilian Hatzmichael Whitley and Hannah Sullivan, in Cardiff the biggest test of their school years is upon them as they prepare to take A-levels.

Both 18-year-olds are taking French, with Hannah adding maths and law, and Lilian sitting psychology and English literature.

In normal times, this would be their third external exam year in a row, and it would feel familiar.

But their year group has had the examination experience turned on its head by Covid.

They were just months away from sitting Year 11 GCSEs in 2020 when school doors closed and exams were cancelled.

Lilian remembers feeling "weirdly quite happy" at the announcement as someone who found exams a nervous and pressured time, despite doing well in the handful of GCSE components she had taken in Year 10.

But that feeling did not endure. "After a month or so of lockdown had settled in, you start to question what you're supposed to do," she explained.

"You're so used to having that routine of going to school and having a goal and preparing for something. When that was taken away, motivation was lost.

"It was a weird time of enjoying the freedom of being able to do something else but at the same time, feeling like there was no structure."

Despite not liking exams, did she feel she had missed out not taking them after all the preparation?

"I felt like I missed out more in the social experience, because it didn't feel like [Year 11] came to an end. You usually have something like prom or a leavers' ceremony to move on," she said.

The shared social experiences of schooling and the loss of that during the pandemic is something both girls brought up as much as the impact it had on their learning.

Hannah also felt "a bit of relief" when GCSEs were cancelled, adding that: "I felt like I didn't get to showcase what I could do in an exam, so it was a bit of a mixture of emotions.

A couple of months into their Year 12, the Welsh government announced in November 2020 all exams would once again be cancelled for the following summer, to give schools plenty of notice this time to prepare for alternative assessment models.

This meant a second lost opportunity for Lilian, Hannah and their cohort to test themselves in the traditional way and gain vital exam technique practice.

Lilian believes the early decision to cancel was "realistically, the best decision, because there was so much disruption".

She said: "Mental health wise, I think we [had] all suffered tremendously. Once you're in it, you don't really understand how much it affects you but looking back I was lacking motivation.

With a second lockdown and school closed from January to March 2021, learning moved back online.

The girls both had regular tests in class, but it was not until nearer Easter it was confirmed there would be formal class-based assessments which would help decide grades, Lilian said.

"I think they should have given us a bit more notice - all of a sudden it was, oh, now we have to prepare for this.

"However they were very generous with a mixture of open-book and closed-book assessments."

Hannah initially found the lack of AS-level exams did equate to less pressure, as she knew in quite some detail what she would have to prepare for in each of the assessments.

"I think we had to do four assessments in each subject... but for a while I don't think most people knew what was happening," she said.

"We knew the exams weren't going ahead but we didn't know what was going to be in its place.

"I tried to keep on top of my work, but there was also a bit of me that was like 'oh well, we haven't got exams, I just have to work in my assessments and then I'll be fine'.

"We knew what the assessment were going to be on [in three cases] so I didn't feel like I'd actually learnt anything, I just regurgitated what I'd written down, and that was it."

However, she struggled with online learning, finding it harder both to communicate during screen-based classes and deal with a lack of peer contact to help with discussing and understanding work.

"I thoroughly disliked working online. It didn't agree with the way I learn at all," she said.

"It wasn't the best time, but the college were great through it all.

"Considering what we did go through with the lockdown, I thought I did quite well [in AS-levels] but I think I would have done a lot better if Covid didn't happen.

'Not used to exams'

Now with their first ever external exams looming, how prepared do the girls feel?

"I think it makes sense for the exams to come back because there have been adapted curriculums and everything, and [course] specs have been adapted for us, so it's not like we're just being thrown into normal exams," said Hannah.

But she added: "I do feel a bit like, oh I don't quite know what to do because there is so much to know.

"But I think I've finally figured out how I'm going to do it. It did take a while."

Their college organised two sets of mock exams for students under exam hall conditions, which has helped in part to make up for the previous years' cancellations, the girls said.

"That practice was really helpful, not only just the revision side of it, but the actual exam experience that is very helpful," said Hannah.

However Lilian pointed out: "I can't say that [missing external exams] hasn't affected any of us at all because it's always difficult to get into that mode of revision and also it's quite strange in a way.

"Although I understand I'm doing exams, it's not something I'm used to because we haven't had as many years of doing them."

But after their experiences with education Covid-style, both of them would like to see permanent changes to how pupils are assessed.

"It's very easy the way the system is to associate intelligence and worth with grades and exams and results.

"I think if we had something that wasn't just based on one or two exams and had a bit more coursework... and having assessments throughout the year.

"Finland for example has a very different system of education, for example. They have less homework and are more focused on things like projects and using your own skills."

Year 12 student Ella Kenny, 16, is taking AS-levels in Swansea in maths, economics and politics this summer.

She had a very brief taste of two external exams halfway through her Year 10 in 2020 before the remaining exam modules were cancelled that summer.

'We don't really know how to revise'

"We have a few exams in Year 10 and most of them in Year 11. I remember the first time I heard [the exams were cancelled] I was actually quite angry because I do quite well in exams rather than coursework.

"But I know a lot of my friends were really happy so it was a very different experience for all of us."

With her Year 11 GCSEs cancelled the following year too, like Lilian and Hannah's AS-levels Ella's results would also be determined by assessments and teacher-awarded grades.

"Looking back on it, I'm quite grateful for the teacher assessments because there are so many exams in Year 11, compared to A-level, and I'm just glad I've got my GCSEs out of the way," she said.

Having less to revise at a time for classroom assessments which were just on one topic did make it simpler in her opinion.

But as she pointed out, there is a flip side to that. "I feel that's hindered us now, because we don't really know how to revise," she explained.

"I would memorise everything for a test, but I can't memorise a whole course [for an exam], so I've been really struggling with that."

Although Ella's teachers have also run two sets of mock exams for practice, she does think revision is a study skill which has been lost because of the lack of external exam practice.

"Even a lot of teachers are saying that when we're doing revision sessions," she said.

"I feel it's a reason why they've made grade boundaries easier this year and they've taken stuff out of the syllabus, because we don't really know what we're doing and it's going to impact our generation for quite a long time."

'There was a lot of disruption'

Emily Powell, 16, from Pontypool was very grateful when her Year 10 Unit 1 exams in chemistry, physics and biology were cancelled in 2021.

She is hoping to continue with scientific subjects at A-level in college, says the level of disruption students suffered during that year would have made it very difficult to be properly prepared.

This summer's GCSEs will include the Unit 2 papers which they will now be solely judged on in sciences.

"I am grateful that [the exams] are going on this year, to be honest, because it feels a lot more normal to how it did last year," she said.

However Emily is feeling less confident about some other subjects because of how the courses are structured.

She explained: "I'm completely fine with my sciences, but there are also subjects like geography where I have to do an exam for the stuff I did in Year 10 and because there was a lot of disruption I'm finding that overwhelming and difficult to go back to."

But overall, given the adjustments that have been made to exams, Emily feels on balance it is right for her cohort to be taking them this year.

"This year has been quite normal compared to the last few years," she said.

"I know there are kids now who are going their AS levels now who never did any GCSE exams and I just can't imagine how that must feel.

"It must be such a scary experience because they don't know what it's like."

Exams are 'validation' for learners

Over at the Welsh exam board WJEC, chief executive Ian Morgan is confident changes made to the exam system for this year has made it fairer for pupils.

Content has been removed from the examination syllabus, elements of coursework have been slimmed down and in some subjects students have had advance notice of the likely topics that would or would not be included in their exam papers.

"In the round, what it was trying to do was focus on the fact that teachers and learners would have lost that teaching and learning time and we were just trying to be cognisant of that in the approach we were taking," Mr Morgan said.

"What we've tried to do is distil [the content] down a bit, drive people in a different direction just to give them some comfort, to some extent, that they wouldn't be assessed on the whole as it was previously."

He thinks the time is right to bring back exams, despite some quite recent fears over because of staff shortages.

"A return to exams is a fair way of assessing what those learners know, understand and can do," he said, adding: "Lots of learners want that validation."